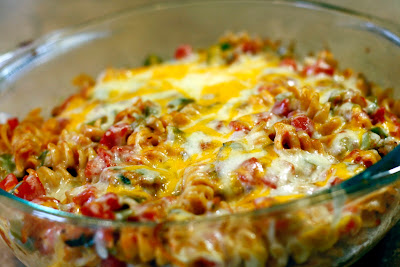 I love this meal. It’s not anything special, but for some reason I really like it. It’s a different way to eat pasta, it has a great flavor, and it’s so nice and cheesy! It also has a good memory associated with it – as far as I remember, this is the first meal Katie and I made in our apartment when we had people over for dinner. We were so proud of ourselves!

It’s a pretty simple baked pasta – When I made it the other night, I used whole wheat rotini instead of penne, replaced the salami with chicken sausage, and took out the olives. I’m pretty sure you could use pretty much anything you wanted in this recipe, and even leave out the meat altogether, and it would still turn out well. Unfortunately, Mike didn’t rate it as high as I’d hoped – turns out there were too many peppers and onions in it for him. But he still really liked it (3.25 rating), and I could easily cut down on the vegetables for next time. Although I happen to like all the peppers and onions, so he may be stuck with it as is.