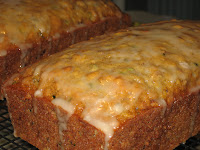 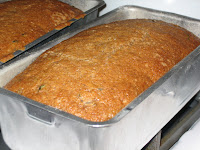 Last week I got a huge zucchini from someone at work. I think it was the biggest zucchini I’ve ever seen. Mike insisted on grating the whole thing, and we got over 10 cups of grated zucchini out of it. This turned out to be good timing since I had 2 new zucchini bread recipes I wanted to try. 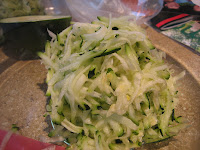 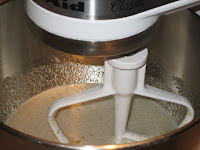 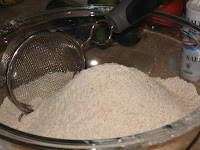 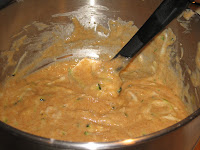 The first recipe, Orange Pecan Zucchini Bread, was from tastykitchen. This bread is great! It has orange juice and orange zest in the batter, and an orange juice glaze on top to give it a nice orange flavor. It’s nice and sweet and light and the glaze is a great touch. Mike rated it a 4 and told me that I should always make “the orange kind” of zucchini bread. 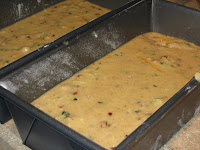 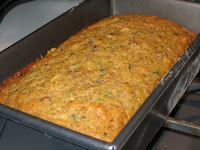 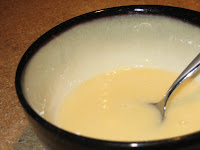 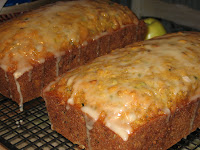 For the second recipe, I decided to try to make it a little healthier. I used a more standard zucchini bread recipe that I found online, but used half whole wheat flour and substituted applesauce for half of the oil. I really like this bread too. It’s not quite as sweet as the orange pecan recipe, but it’s nice and cinnamony and moist. It’s great right out of the refrigerator with a little bit of butter on it. I don’t think Mike rated it, because he’s too busy eating the orange pecan zucchini bread. But I would definitely recommend this bread, especially if you want something a little healthier. 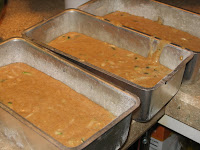 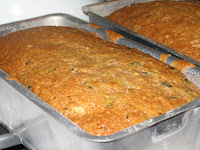 Directions:
Preheat oven to 350ºF and grease and flour the bottoms of two loaf pans. I use 8″ pans, but 9″ would work as well. In a large bowl or a mixer, beat the eggs until they are a deep lemony yellow. Beat in sugar, and then stir in shredded zucchini, orange juice and the oil. In a separate bowl, whisk together flour, baking powder, baking soda, salt, cinnamon, cloves and orange peel. Fold in chopped pecans (or nuts of choice).
Bake at 350ºF for 50 to 55 minutes until a toothpick inserted in the center comes out clean. Remove from oven, cool slightly.
When bread has been removed from the oven, mix together powdered sugar and 2 tablespoons of orange juice. Add additional orange juice in 1 teaspoon amounts if it is too thick. Spread glaze over baked loaves while still warm. Allow to cool completely. Wrap tightly and store in the fridge.