*Note: Due to Megan’s travels this weekend, she requested that I (her husband, Mike) fill in for her with my first ever guest post about trying to manage my hunger without her and care for a new puppy at the same time.  Luckily for her, I was happy to do a guest post.  (Plus, I didn’t want to upset her and lose the benefits of her making my lunch every day.)

So as Megan mentioned in her last blog posting, she flew to Atlanta on Thursday to attend the BlogHer Food annual conference.  This was pretty close to my worst nightmare coming true…how was I going to feed myself, much less take care of the needs of our new 9 week old puppy?  Lucky for me two couples knew my plight and came to my rescue…plus, there is always cereal.
Disregarding the various meals that consisted of Honey Nut Cheerios or canned soup, here are some weekend highlights – proving, that yes, even non-culinary husbands with food blogging wives can make it through a weekend alone:

Friday
As soon as Megan announced that she was going to be gone for the weekend, one couple immediately asked if they could bring something over for me on Friday night…yes!  And what did they bring over? 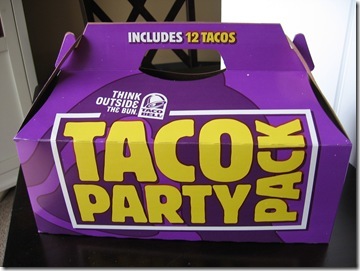 How awesome! I bet no one expected Taco Bell to be making an appearance on What Megan’s Making…but this is my post, not hers.  Six delicious, greasy, processed tacos later and I was one very satisfied husband.  More unhealthiness in my system in one night then I’ve had in months and I loved every bit of it.

Puppy tracker: Wins – Played fetch for hours, made it up and down our long flight of stairs for the first time, showed enthusiasm when meeting neighbors; Losses – crying for hours when it was supposed to be bedtime, #1 in crate (twice), #2 in living room, subsequently in his mouth (briefly), #2 outside at night (great!), but subsequently sat in it, leading his owner to perform the following in order to remove it from his hair: a) toilet paper wiping, b) water faucet rising, c) clipping butt hair into toilet when all else failed.

Saturday
Lunchtime provided my proudest moment of the weekend – making myself scrambled eggs!  It was a difficult task, but I actually did succeed in making an edible dish.  I even Pammed (is this a word?) the pan before adding the eggs. 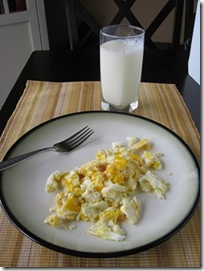 How good is that food photography, despite not having the good camera…or ever doing it before? 🙂

Two more friends, Kevin and Hillary, then joined me for dinner on Saturday night and brought an amazing dish of enchiladas, with chips and salsa on the side.  Hillary even created the recipe herself, which blew me away!  Kevin and I each ate three…definitely a 4.0+ recipe!  I didn’t take a picture because I didn’t want to do the meal an injustice with bad photography, but maybe I’ll be lucky enough to have it again someday.

Puppy tracker: Wins – Realized how much he loves being scratched on his stomach, fell asleep in any position, didn’t chomp on fingers and toes at every opportunity, completed a full walk around the neighborhood; Losses – #1 in crate, #2 in living room, whining for hours at night; Win/Loss – Somehow managed to climb over or under the divider in his crate and trap himself in the non-door side.

All in all it was a good weekend, but I am glad Megan is back.  The real question for the week: what IS Megan making?