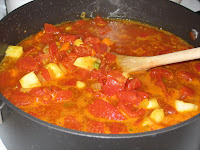 On Sunday evening we had our friends, Kevin and Hillary over for dinner. I knew they had previously tried and liked the chicken and chickpea curry recipe so I decided to try out another similar sort of recipe on them. (Similar in that it contains chickpeas, and some of the same spices). This recipe is from cooking light, and I made it once before with Katie and we both really liked it. It’s simple and healthy and definitely something a little different.

In my mind, the highlight of the dish is something the recipe doesn’t even call for – raita. Raita is an Indian side dish of cucumbers and yogurt and a few spices that has a cooling effect on spicy dishes. I don’t like food that is too spicy, so I think it’s a wonderful addition to the meal. 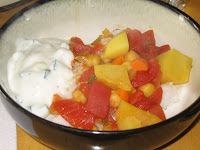 The recipe is pretty simple – you just saute the vegetables, add the rest of the ingredients and simmer until the potatoes are done. Not very time consuming, but it tastes wonderful from all the spices you mix in. We served it with rice, raita, pita bread and hummus – it was a wonderful meal, and our guests seemed to enjoy it as well. Kevin actually rated it a 4.5 – a higher rating than I’ve ever gotten from Mike. I think we’re going to have to have them over more often. 🙂 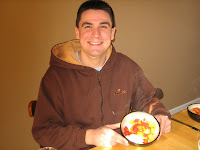