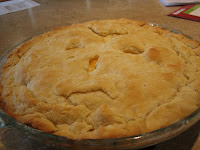 This was awful. I wouldn’t even put it on the blog, except Mike told me I have to for full disclosure. I guess I shouldn’t be completely surprised it was so bad, I mean “Tomato Pie” doesn’t necessarily sound the most appetizing. But I saw the recipe on one of my favorite food sites and it got rave reviews, plus Mike loves tomatoes, so I really thought he would love it. I should have stuck with my first instinct.. He rated it a 1.5, and that was after I had tasted it and already decided I was never making it again.

It started out well enough – a biscuit crust (you can tell from the pictures that this might have been the first time I tried to roll out a pie crust and put it into a pie plate), tomatoes, corn, basil, salt and pepper. So far so good. I think the lemon juice mixed with mayonnaise was when it started to go downhill. 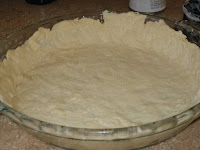 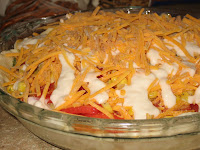 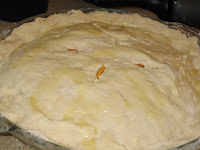 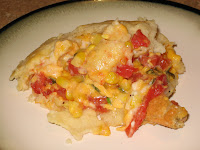 I couldn’t even finish one piece. Mike somehow managed to eat 1 1/2, but then gave up. We ended up just picking the biscuit pieces off the top and eating those. The parts that hadn’t touched the filling were actually really good, and I’d like to try this crust again with something like chicken pot pie. Too bad the rest of it was terrible.

This is the picture of how much we threw away…It was sad to throw that much food away, but definitely better than attempting to reheat the leftovers. 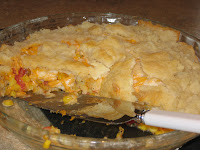