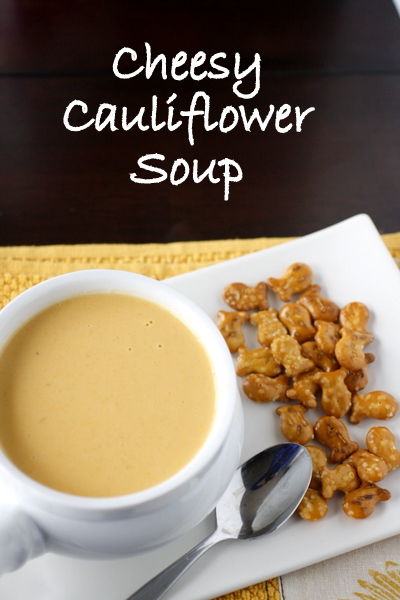 If the words “cheesy” and “soup” are in the title of a recipe, you can be pretty certain that I’m going to want to make it. I found this recipe for cheesy cauliflower soup in a magazine (unfortunately I can’t remember which one) over a year ago, and just a few weeks ago I stumbled on the piece of paper where I had copied down the ingredients. Of course I wasted no time in giving it a shot, especially since it’s the type of recipe where you throw everything into the crockpot and let it cook on its own. And as I suspected, we were big fans of this soup. Anything cheesy and creamy is usually a success around here, but I was surprised at how much I liked the subtle cauliflower flavor. Plus, the fact that there is a whole head of cauliflower pureed into the soup made me feel like it was at least a little bit healthy.  And yes, as you see in the pictures, we ate this with little pretzel goldfish swimming around in the soup – I’d recommend it. 🙂 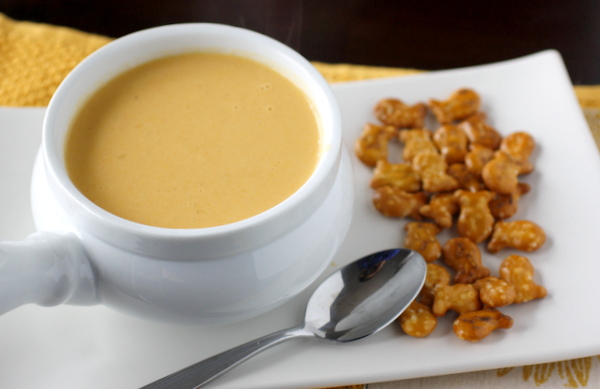 Place cauliflower in the slow cooker. Chop the celery, carrots, peppers and onion and add to the slow cooker. Stir in the broth, Worcestershire sauce and salt and pepper. Cover and cook on low for 5-6 hours, or until vegetables are tender.

In a blender, process the soup in batches (or use an immersion blender) until smooth. Stir in the cheese and half and half. Cook on low until cheese is melted and soup is warmed through. Be careful not to let it come to a boil.