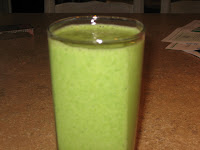 Don’t be alarmed by the color, but this is, in fact, a green smoothie. You might ask what would take a perfectly good smoothie and make it the color of spinach, and the answer is, surprisingly enough, spinach. Yes, I have learned through various other food blogs that you can add whole handfuls of spinach to smoothies without affecting the taste or texture in any way! I know it sounds kind of gross, and I was skeptical at first too, but after drinking multiple smoothies with spinach in them, I am completely convinced. The above combination is a banana, a large handful of spinach, a sugar-free vanilla carnation instant breakfast, a cup of milk, and a handful of ice cubes. This is one of my new favorite breakfasts. It tastes great, and for someone who seems to be constantly lacking enough iron, this is a great way to get in an extra serving of vegetables. It makes me feel healthy.

For those of you that still aren’t convinced, let me tell you that I started adding spinach to Mike’s smoothies as well. The normal combination is a banana, some type of flavored low-fat yogurt, ice cubes, a few ounces of juice, and now a handful of spinach. Because of the yogurt and juice, however, his does not turn the lovely shade of green you see above – it’s more of a disgusting brown color. His face was quite comical when he saw his smoothie and I told him there was spinach in it. But he agrees with me – you can’t taste it at all! He even gave me permission to add spinach to his smoothies in the future too 🙂

Just thought I would pass this little tip along if anyone is looking for a way to get in any extra vegetables. 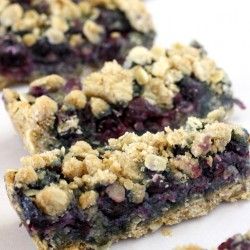 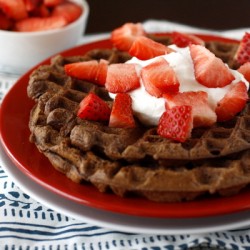 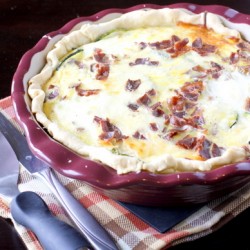