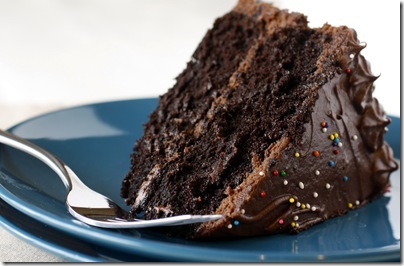 I was tempted to leave a description out of this blog post and just let the pictures speak for themselves, but I can’t help but talk about this cake. Its incredible moistness. It’s light, yet sturdy texture. The intense chocolate flavor. And best of all…the hot chocolate buttercream icing. Yes, you read that right. Hot Chocolate Buttcream Icing.  Joy the Baker calls this “the best ever chocolate frosting.” I agree – and I would appreciate it if we didn’t talk about how much I ate. 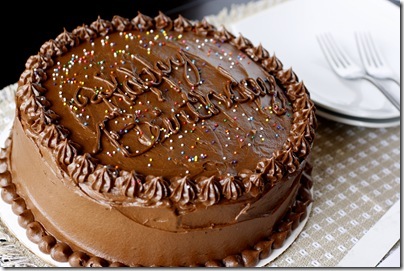 We had a family birthday party last weekend and I was asked to bring the cake. Well…that’s not exactly accurate. I got the email about having a family party and immediately started thinking about cake flavors. I came up with a few different options and printed the recipes before Mike asked me: “Were you even asked to bring a cake?” Minor details! I decided on the dark chocolate cake you see here and emailed my mother-in-law saying “I’d be happy to bring a birthday cake if you’d like.” (In my head I was thinking “Pleeeeease let me bring a cake because now I’m sold on this cake and I have to make it and I should definitely not be left alone with a whole cake at our house!”). 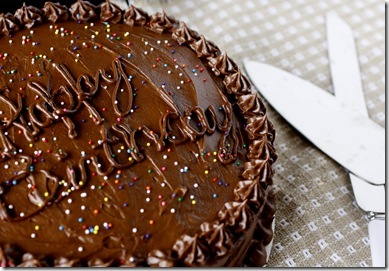 And let me tell you, this cake surpassed my expectations. I used to think that homemade cakes just weren’t as good as the boxed variety, but there’s no way I could think that after tasting this cake. And I don’t even like chocolate cake! If you’re a chocolate fan, this cake is for you. Seriously. Go to the store, get whatever you need to make this cake, and make it. Your family will thank you. 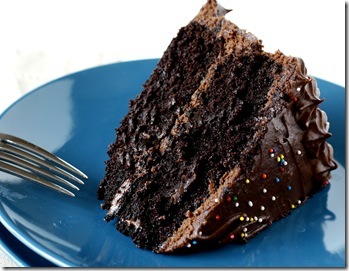 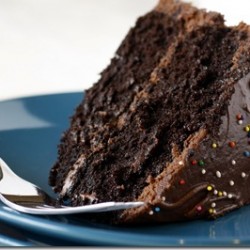 For the cake: Preheat oven to 350 F. Prepare 2 x 9″ cake pans with butter and flour or parchment paper. Sift the dry ingredients into the bowl of electric mixer. Add the remaning ingredients to the bowl. With paddle attachment on mixer, mix for 2 minutes on medium speed (you may need the plastic splashguard that comes with mixer). The batter will be liquidy. Pour into prepared pans.

Bake for 20 minutes, then rotate the pans in the oven. Bake 15 minutes longer or until a toothpick comes out clean – approximately 35 minutes total. Cool on wire racks for 20 minutes then gently invert onto racks until completely cool.

For the icing: Cream together butter, cocoa powder and salt. The mixture will be very thick. Scrape down the sides of the bowl and add the powdered sugar. With the mixer on low, mix in powdered sugar while slowly adding milk and vanilla extract. As the sugar incorporates, raise the speed of the mixer to beat the frosting. Beat until smooth. In a separate bowl, stir together heavy cream and hot chocolate mix. Turn mixer speed to medium and pour cream mixture into frosting in a slow, steady stream, until you’ve reached your desired consistency. You may not need the full amount of hot chocolate mix and cream.

cake recipe from Sweetapolita and icing adapted from Joy the Baker 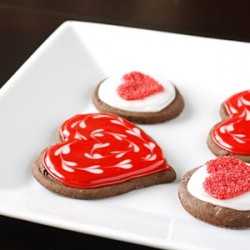 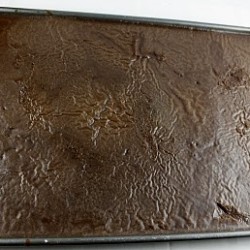 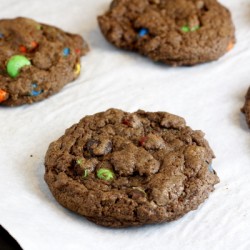