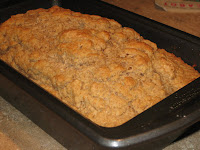 This is a great tasting and easy loaf of bread. I’ve made beer bread before from a couple different recipes, but this one is my favorite so far. It’s slightly sweet and the crust is great (probably from the melted butter you bake on top of it…). This was perfect eaten warm with butter and oddly enough…salt. I really thought I had accidentally left out the salt in the recipe because the bread tasted disappointingly bland when I first tried it, but as it turns out there actually is no salt in the recipe. We resorted to sprinkling salt on top the bread as we ate it and even Mike (who can’t normally taste these things) agreed that it made a big difference. So I think that next time I might add a tsp of salt to the batter…does anybody have any other suggestions? I left a comment on the blog where I found the recipe asking about it, and he said it could be the type of beer I used (Corona Light) or the type of butter (Imperial margarine). I have no idea, but the bread was great once we added some salt, and very easy, so I will definitely make it again. Plus it is made from half whole wheat flour so that makes me feel healthy. 🙂 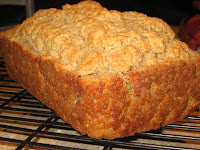 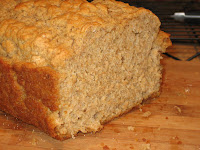