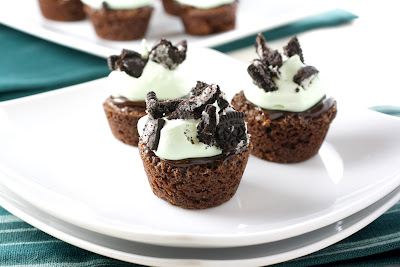 I’ve got a great St. Patrick’s Day treat for you! These little brownie bites are one of the best things I’ve ever made. Mike actually liked them so much he requested I make them again a few days later for him to take into work. These cute little treats consist of a mini brownie cupcake, a thin layer of hot fudge, a whipped cream mint frosting, and sprinkles of oreo crumbs. All of that in a 2 bite dessert! These things are dangerous. 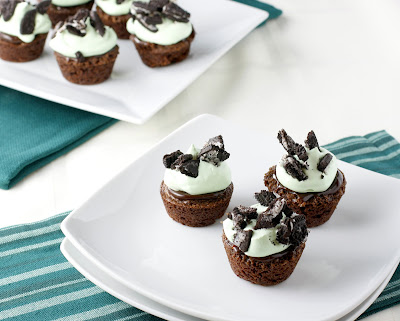 I got the idea from a fun new blog I’ve been reading: Confessions of a Cookbook Queen. She made brownie parfaits in a jar with the same layers I’ve used here. I didn’t have any jars to bake in, so I transformed the idea into mini cupcakes. Definitely one of the best ideas I’ve ever had. Not only are they delicious, rich and decadent, they’re also cute! I was rushing around when I made these and used a box brownie mix (Ghirardelli) for the brownies. You could always use your favorite brownie recipe instead. I think they’re absolutely adorable in cupcake form, but you could also bake them in a standard brownie pan and just layer the rest of the ingredients on top. With the combination of gooey brownies, hot fudge, minty whipped cream frosting and oreos, you pretty much can’t go wrong! 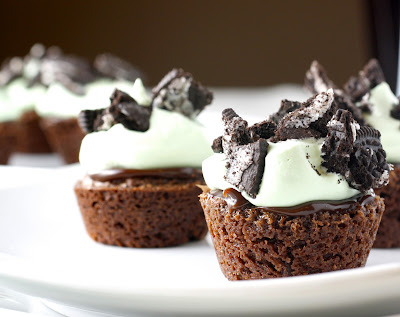 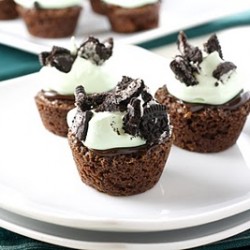 Meanwhile, make the minty frosting. In the bowl of a mixer, beat cream cheese and sweetened condensed milk until smooth, scraping the bowl as needed. Gently fold in Cool Whip, mint extract and green food coloring until mixture is well blended and desired shade of green is achieved.

Heat the hot fudge slightly to make it spreadable and spread a thin layer on top of each brownie. If the hot fudge is too warm, allow to cool before adding the icing. Place a dollop of mint frosting on top of the hot fudge and sprinkle with crushed oreos.

inspired by Confessions of a Cookbook Queen 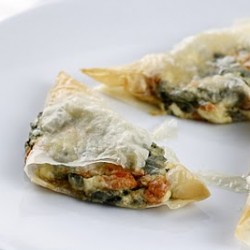 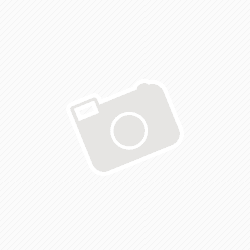 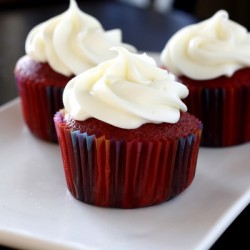