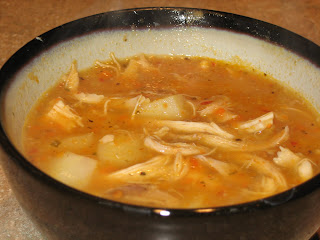 When I first saw pictures of this soup, I knew I wanted to try it. It looked like something both Mike and I would really like. However, once I read that parts of the soup mixture had to be pureed in a blender, I almost decided against it. I tried that once with butternut squash soup and it created a mess, and in general I viewed it as more trouble than its worth. I’m definitely glad I gave it another shot for this recipe though. 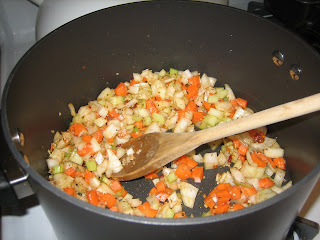 You puree the cooked vegetables and broth together, which not only gives it a nice warm orange color and semi-thick texture, but it also has the effect of spreading the chipotle spiciness evenly throughout the whole soup. You then add cooked, shredded chicken and potatoes to that base to create a wonderful, spicy, chowder-like soup. Mike really liked this and rated it a 3.5. And we both agreed that it tasted even better the second day, although unfortunately there was not as much leftover as I was hoping. Following the recipe, the soup is pretty spicy, but I could still enjoy it even with my low tolerance for spicy foods. I’m sure you could make it even more spicy by added some extra chipotle peppers if you wanted to. 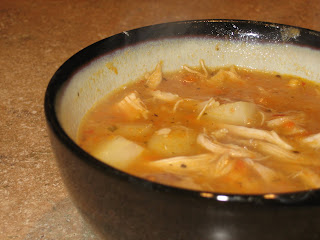 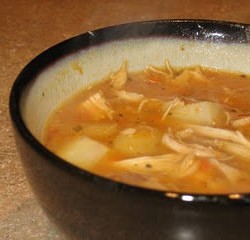 Heat oil in a large Dutch oven over medium heat. Add chopped chile, adobo sauce, onion, and next 6 ingredients (through garlic); cook 7 minutes or until onion is tender, stirring frequently. Stir in broth; bring to a boil. Simmer for 20 to 30 minutes or until vegetables are tender.

posted in Soups, Stews and Chilis
3 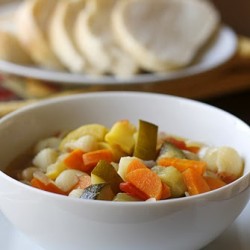 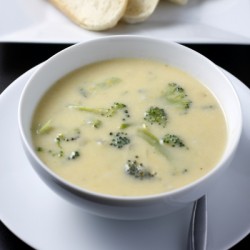 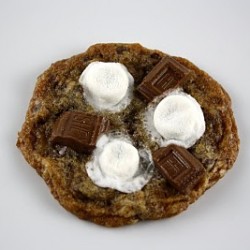